There is a shortage of modern homes in every neighborhood, but it is most pronounced in Highland Park. Elegant, eclectic style homes – ranging from the 1920s Mediterranean and Spanish Colonial to the homes built over the next eight decades in the English, Georgian, Italian and French style – captured the aesthetics of most Highland Park homeowners who desired to live in this beautiful township close to downtown Dallas. The rare person desiring a modern home found land more available in Bluffview, Preston Hollow or Oak Cliff. While some magnificent midcentury modern homes were built in Highland Park in the 1950s and 1960s, and an occasional modern home designed later, European style homes prevailed in Highland Park.

Now There is Great Demand for Modern Homes in Highland Park

Starting in the mid 1990s interest in modern homes became more pervasive. Recent graduates emerged from college with great passion for modern design but not yet the resources to buy a home. At the same time, a generation who had lived in traditional suburban homes their entire lives wanted something different, something better, something modern. The market dynamic changed. Only a few years ago a buyer was usually thinking, “I love this modern home but will I ever be able to find someone else who likes a modern home when it comes time to sell?” Now the marketplace tables have turned and perceptions have changed. Buyers are now often thinking, “Will I ever be able to find a modern home?”

How modern homes will become more prevalent in Highland Park

Builder homes, no matter what size, often become economically and aesthetically obsolete after 25 years. As a result, over the next 10 to 20 years, a huge number of traditional homes will become candidates to be replaced by modern homes. The more immediate change will come from homeowners who find a traditional Highland Park home for sale and transform the interior to a modern space.

This traditional home that was transformed into a modern space has made me realize there is a whole new reason to be enthusiastic about preservation and renovation. Up to now, my passion for homes has revolved around revitalizing neighborhoods, saving historic homes, or bringing attention to, or encouraging more architecturally significant homes. Now I better realize the value in existing homes without great historic value or a spectacular architecture pedigree. Here is an attractive well-proportioned home that lent itself to a modern renovation. An inspiring and important art collection compiled of mostly young artists from Europe and the U.S. has made the house architecturally excel. The space is sympathetic to art, supports and even catapults the art visually. The residence also recedes from the art. Hints of the home’s traditional architectural past bring a subtle contrast to the arts, and a familiarity and comfort to the space that allows the mind to fully explore the inspiration and power of each piece and of the art collectively.

Every great city has art patrons, and civic leaders who encourage the arts, lead by example, and donate their time and money to create a rich cultural fabric for the city. Dallas is the best example of a city with generous philanthropists and, just as important, a city where the brightest and the best have taken a deep, personal interest in Dallas that goes well beyond the scope of their magnificent donations. There is a reason Dallas has the only opera hall in the world funded primarily with private funds. There is also a reason why in one generation a little fine art museum by the lagoon in Fair Park became the Dallas Museum of Art now at the center of the Arts District, surrounded by the I.M. Pei designed Meyerson Symphony Hall, the Renzo Piano designed Nasher Sculpture Center, the Joshua Prince-Ramus and Rem Koolhaas designed Wyly Theater and the Norman Foster designed opera hall, the Booker T. Washington High School for the Performing and Visual Arts (Arts Magnet) school and the Annette Strauss Artist Square. It was not enough to have just museums and performance spaces. Aesthetically, Dallas desired the finest.

The next generation of art collectors and civic contributors

At some point, the torch will be passed to another generation passionate about Dallas and aware of the importance of art in the life of the community. Derek and Christen Wilson are part of that generation. As we can see from just a glimpse of their art, they are passionate collectors with a good eye. Their home and collection recently also received an enthusiastic reception from art dealers from across the country when they came to Dallas for the Dallas Art Fair. The Wilson’s home and the Edward Durrell Stone designed home of John and Jennifer Eagle were the two Dallas homes chosen for this audience of art dealers. Patron members of the Dallas Museum of Art just had a chance to also view the Wilson’s home and collection. It is exciting to see Derek Wilson on the DMA Board of Trustees and Christen and Derek’s involvement in Two by Two, Silver Supper and so many other initiatives of the Dallas Museum of Art. They join the next generation of talented, committed civic leaders who continue to make Dallas the best city in the country. 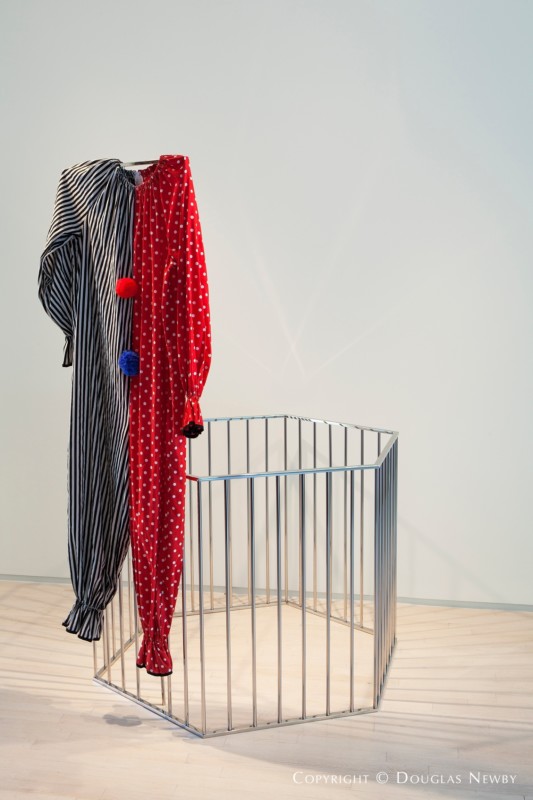 Sophisticated art collectors like Derek and Christen Wilson install art in their home for their personal enjoyment and also to share with friends, collectors, and patrons of the arts from across the country and around the world. Just as a museum’s display of art revolves, the personal collection exhibit in a home revolves and evolves. Here you can view a few of the pieces in Derek and Christen Wilson’s collection shown their modern home in Highland Park.