Why are some modern architectural designs (such as the work of O’Neil Ford, FAIA, Scott Lyons, FAIA, and Frank Welch, FAIA) new, progressive and influential while other modern designs seem trendy and tired at the same time?

The Best Architecture for a Site Creates Timeless Design

Timeless modern architecture is inspired by the site, crafted by the finest artisans, and built using the best technology and materials of the time — those that are familiar as well as technologies and materials that have recently become available. Every era has its achievements from which we build, reinterpret and admire. Great design of any period remains great design.

The Haggerty/Hanley house that architect O’Neil Ford designed in 1957 is a great example of timeless design. This midcentury Texas modern home draws from Ford’s earlier 1930s Texas modern work as well as that of David Williams, FAIA, which combined elements of European modernism and pioneer houses. This home is artfully situated to emphasize the site and orientation of the home in relationship to the sun much like the first Texas modern home David Williams designed in 1933 on McFarlin Boulevard with views of Turtle Creek. The Haggerty/Hanley home is also considered the best combination of Texas modern architecture and Texas modern art.

Architect O’Neil Ford designed the Haggerty/Hanley home in a much larger scale, one that is common today but rare in Dallas at the time. Taking advantage of the beautiful acreage bordered by a creek, O’Neil Ford designed the home almost as if it were a village, much like the early homes of Texas. It is set down from the street, wrapping around the topography with walls of windows in the living areas closest to the creek.

Even when designing in this larger scale, O’Neil Ford drew from his memory of sketching earlier pioneer homes. O’Neil Ford also still relied on the same artisans like his brother Lynn Ford (who did the metal work and wood carvings on O’Neil Ford’s first modern home) for the architectural details on the Haggerty/Hanley home. 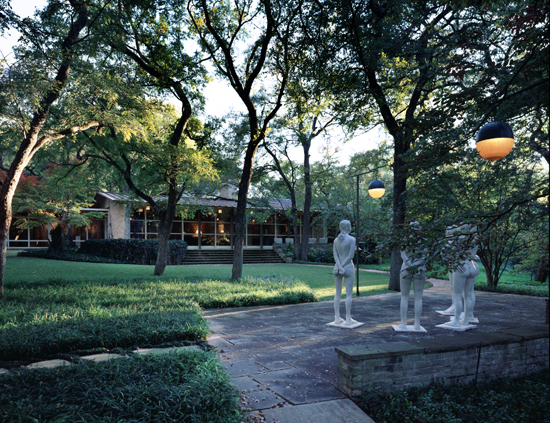 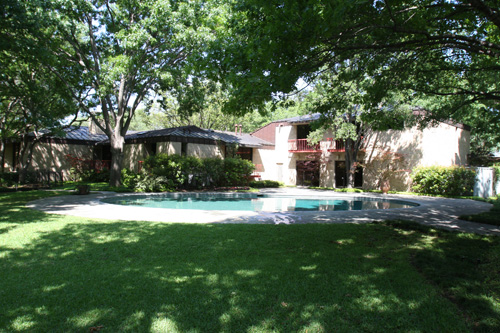 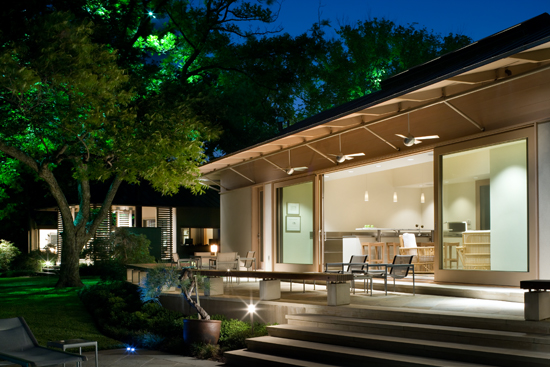 The Haggerty/Hanley home reiterates detail and handcrafted artisanship while creating new volumes and uses of materials that influenced great architects like Scott Lyons and Frank Welch who worked with O’Neil Ford and whose later work reflected Ford’s influence.

These three Texas modern homes by O’Neil Ford, Scott Lyons, and Frank Welch were built over a span of 50 years and yet all remain architecturally current and influential. The beautiful estate area acreage and topography drove the design of each of these homes. All three are approximately 10,000 sf, built with steel frame construction, and designed as a series of attached structures with a significant secondary structure.

Architects locally and around the country come to see this midcentury modern Texas home and the living room O’Neil Ford designed. Architects admire and absorb the hand carved open wood screen, the continuous walls of soft Mexican brick, the walls of windows overlooking the lawn and sculpture garden as it descends to the creek, the pitched ceiling that gives balance to the spacious dimensions of the space, and the stick ceiling that acoustically softens the room and brings warmth. The floating wall gives separation without impeding the immense openness of the room.

In 1983 Scott Lyons was selected to design a home on possibly the most beautiful land in Preston Hollow. Like O’Neil Ford, he submitted the design of this modern home to the landscape. Scott Lyons set the house down from the street with the main living room closest to the deep ravine and spring fed creek. The home expands and cleans up the horizontal axis while still retaining the indigenous qualities of the materials and details. An open wood screen shields and announces the living room from the front door. A stick ceiling is not used as a finish, but an exposed ceiling joint on the pitched ceiling dramatizes the precision in which the house was built. The oversized soft Mexican brick complements the warmth of the cross-cut white oak. The wall of floor-to-ceiling windows wraps around the room, providing views of the creek and small lake beyond the garden. While the house almost disappears when viewed from the street, from inside it affords a spectacular view of the beautiful land on which it is set.

Approximately 50 years after O’Neil Ford designed the living room in the Haggerty/Hanley home, Frank Welch designed the living room for this home in the estate area of Bluffview. A wall of windows looking over the garden, a pitched ceiling with a tight pattern of parallel sticks, a floating wall, and cross-cut white oak finishes add depth and polished texture to the room.

Frank Welch does not mimic the past. Frank Welch designs homes that reflect ideas of the past that he advances with new technology, greater precision, proportions that are perfect, and a design that is fresh, exciting, and will influence generations in the future.

Great architects like O’Neil Ford, Scott Lyons, and Frank Welch have designed modern homes that are perfect for the site, beautifully crafted and articulated, and offering a new vision for future generations.