A brilliantly designed home will always be a fabulous home. A talented landscape architect can add even more context, texture and meaning to an architect-designed home.

Many think of landscapes as a “builder allowance” of a few thousand dollars for some hedgerows, foundation plantings and flower beds that serve as mitigating ornamentation. However, I’ve developed quite a different opinion having seen the work of great landscape architects in Dallas, such as the legendary Arthur and Marie Berger, and Thomas Church, as well as current landscape architects such as Armstrong-Berger, David Hocker, David Rolston, Kevin Sloan, Harold Leidner, Michael Kinler, Seeing their work in context to architecturally significant homes, it’s clear that these architects help accentuate the design of the home and give the home context in the same way a natural setting such as a mountain or a lake defines the essence of a residence.

Two excellent examples of the collaboration of a landscape architect (David Hocker) and an architect (Gary Cunningham) are the Power House in Dallas and the Pool House in Highland Park. The combination of these two talents and disciplines created extraordinary results.

Landscape architect David Hocker recently won two American Society of Landscape Architects Honor Awards for these projects. Usually these landscape awards go to architects who design in the mountains or along the ocean on the West Coast or in the verdant and forested East Coast. David Hocker won for these two landscape designs: The Power House, a 1930s former commercial structure renovated for residential use, and The Pool House in Highland Park, a new urban retreat for an artist and for a car collector who resided next door. The landscape of The Power House softens the hard edge of the commercial structure with native plants, but maintains the sense of urbanity with its strong structural elements.

Gary Cunningham was commissioned to design The Pool House that would function as an artist’s studio, a gallery for cars, a family space, guesthouse and a space for large social gatherings. The desire was to quietly insert a modern home into an opulent, traditional neighborhood. This was accomplished by subtly placing it at the rear of the lot, behind a stainless steel wall illuminated from within. Also, this modern two-story box has 5,250 square feet, which is similar in mass to the original Highland Park estate homes. The combined size of this freestanding addition and the main house also mimics the mass of the new Highland Park homes being built nearby. David Hocker then created a garden design where both houses and lots contributed to the formation of a large garden en masse.

Existing red oaks and elms were included into the design as well as a minimal plant palette that was previously used for texture and privacy. In Texas the great natural asset is the bright sun and blue sky, which beg for glazed walls and an easy transition from indoors and outdoors. Some consider the harsh Texas sun and intense heat an environmental liability. Here you can see how the contributions of David Hocker, the landscape architect, and Gary Cunningham capture the sun and sky and mitigate their often harsh consequences.

The south façade is glazed in frameless, insulated glass incorporating two eight foot wide sliding glass doors. The 14 foot cantilevered roof insulates the interior from the overhead sun and still allows in the low sun and also serves as a porch to the glass tiled infinity edge swimming pool.

Large stone slabs become sinuous connectors throughout the garden and provide the transition from the street to the interior concrete floor of the first floor that extends outside into a deck that surrounds the infinity edge pool. A sunning deck extends out over the pool into the garden. The ipe wood decking complements the ipe wood skin of the pool house. The client’s affinity for blue is incorporated by both architects into meaningful interior and exterior features.

Gary Cunningham and David Hocker designed to the extraordinary taste of their clients and to unique talent of each other. The result is a free-standing addition on an independent lot that is bold and demure in design as it effectively becomes part of the whole.

Great architects are very skillful in picking the best site in a neighborhood. Often an architect-chosen site is one that shows potential but becomes spectacular. The most exhilarating homes are influenced by the site, and accentuated by the landscape architect.

Landscape architects Arthur and Marie Berger were great friends and collaborators with architect O’Neil Ford. The Bergers had O’Neil Ford design their small, midcentury home at 3900 Stonebridge, on a bluff overlooking Turtle Creek. It has since been torn down, with a large new house built on the lot. While the new house still has the advantage of a pretty location, this home never had the magic to capture the imagination of the public as did the O’Neil Ford designed Arthur and Marie Berger landscaped designed home. The new home dominates the site; the O’Neil Ford home submitted to the site, which the Bergers subtly influenced with their landscape design.

Around the corner at 3514 Rock Creek, O’Neil Ford and Arthur and Marie Berger collaborated on another home in 1936. On a tucked away street, this home was designed on .6 acres with the land plummeting towards the creek, giving the first floor and second floor windows a view looking down Rock Creek before it joins Turtle Creek. I can imagine the Bergers and O’Neil Ford traipsing through untamed land, evaluating the contours and orientation that resulted in a two-story L shaped house with endless forest views even now when the neighborhood is fully developed.

One of their most important collaborations with O’Neil Ford was for the Preston Hollow midcentury Texas Modern home designed for the Haggertys.

Maurice Fatio designed this home on 22 acres in 1939. He was voted New York’s best architect and was the refined alternative to Mizner in Palm Beach for his beautiful estate homes. A visit to the Crespi Estate is breathtaking. Originally the entrance was from Walnut Hill Lane. Only after the first wide graceful turn on the descending drive did one see a magnificent French style estate home with a motor court flanked by a mature allée of magnolias. A visitor falls in love with the house along the drive that creates a transcending transition from city to estate. 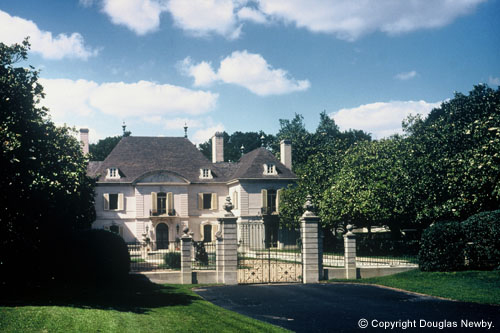 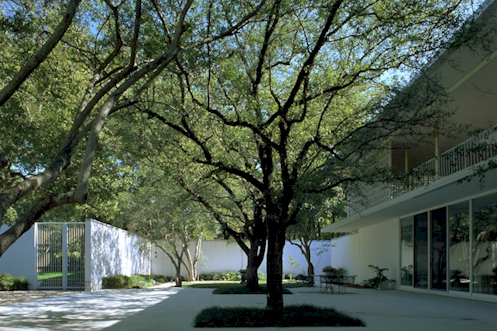 Edward Durell Stone, FAIA, and landscape architect Thomas Church appeared to have designed interior and exterior spaces as one person. The Edward Durell Stone home on Meadowbrook and Park Lane is a perfect example of their seamless work. The courtyards surrounding the home became rooms that provided light, privacy and intimacy for the exterior and interior spaces. The open interior spaces felt like an extension of the exterior. Pools of water were moved inside; a band of water circled the dining room island. A swimming pool became a centerpiece of the living room. Exterior terraces and verandahs became living spaces as one looked into the refreshing and open interiors. Glazed glass walls and hand carved screens blurred the boundaries of interior and exterior as the talent of Thomas Church and Edward Durell Stone blended the boundaries of their respective contributions to this architecturally significant home. 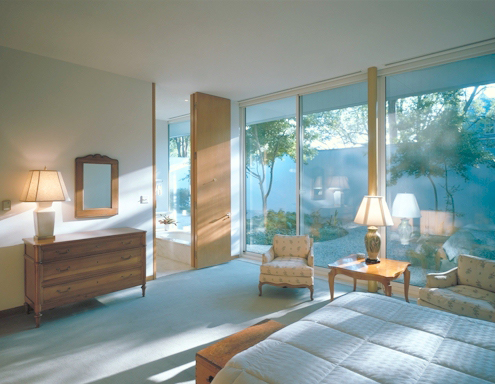 Architect Gary Cunningham is an incredibly talented and accomplished architect known for pushing the envelope, experimenting with design and materials. Both his commercial and residential work has received Dallas and Texas AIA awards throughout two decades. The Pool House in Highland Park is a good example of the landscape architect not competing with the residential architect, but accentuating and helping define the architectural work. David Hocker’s landscape gives further balance and dimension to the architectural design of Gary Cunningham.